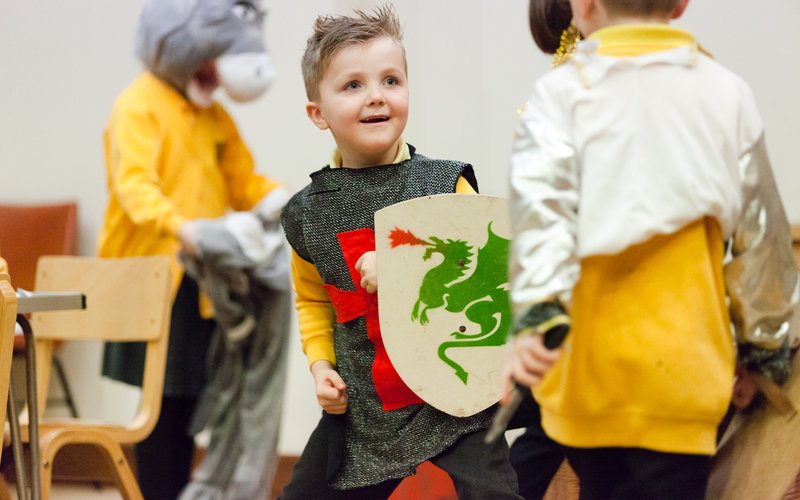 Find out more about our national celebration for Primary School children

Shakespeare Week is an annual national celebration of Shakespeare in primary schools organised by the Shakespeare Birthplace Trust, giving children a great first encounter with Shakespeare – his characters, stories and language.

With emphasis on fun and engaging activities, Shakespeare Week has so far reached around 6.5 million children in over 12,000 primary schools in the UK since its launch in 2014.

Shakespeare Week has been embraced by Britain’s best-loved cultural institutions to deliver a fun-packed week that will bring Shakespeare’s works, creative legacy and the nation’s cultural birthright to life for everyone’s enjoyment.

Throughout the week primary school children participate in their own performances, celebrations and activities - acting out Shakespeare, crafting puppets, even understanding science, history and numeracy through Shakespeare’s world.  To ensure equality of opportunity we have a bank of cross-curricular resources, available free of charge, to motivate and inspire teachers to open up the world of Shakespeare to their class.

We also inspire children to explore and develop their own creativity and cultural interests outside of the week of celebrations.  Through our website and partner activity we encourage children to make discoveries beyond the classroom, with fun activities and challenges for all the family to continue their Shakespearian journey at home.

We have significant reach into communities with low levels of cultural engagement; 435 schools who took part in Shakespeare Week 2016 were in the top 10% most deprived wards in England. The Shakespeare Birthplace Trust has recently received money from Arts Council England to continue its Museums & Schools programme, which gives primary school children from areas that have lower than average cultural engagement an opportunity to learn more about Shakespeare and encourage a lifelong passion for the arts and heritage.

Shakespeare Week won Best Educational Initiative in the Museum and Heritage Awards 2015 and a Chartered Institute of Public Relations Award for Best Cultural PR campaign for impact and engagement.

About the Shakespeare Birthplace Trust:

The Shakespeare Birthplace Trust is the independent charity that cares for the world’s greatest Shakespeare heritage sites in Stratford-upon-Avon, and promotes the enjoyment and understanding of Shakespeare’s works, life and times all over the world. Established by Act of Parliament in 1891, the charity runs formal and informal educational programmes for people of all ages.

It holds the world’s largest Shakespeare-related museum and archives open free to the public, a collection which is designated as being of international importance. The Shakespeare Birthplace Trust receives no public subsidy or direct revenue funding; it depends on income generated through the support of visitors, donors, grant donors, volunteers and Friends.