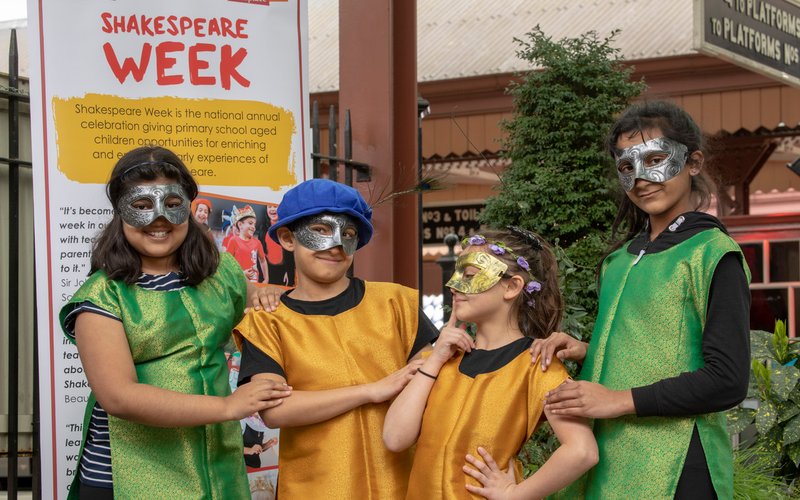 A new network of Shakespeare Hubs offer primary school-aged children an exciting introduction to the plays of William Shakespeare through bespoke art experiences.

Over the four year funding period the project will involve setting up Shakespeare Hubs for primary schools in 12 regions across England. Each regional Hub will be made up of six to eight schools with high levels of pupil premium. Children in the Hubs will have the chance to work with exciting arts practitioners to help immerse them in the work, life and times of Shakespeare.

So far, six Shakespeare Hubs have been established in London, Birmingham, Merseyside, Oxfordshire, Nottinghamshire and the North-East (Tyneside and Northumberland). Three new Hubs are currently being established in Bristol, the Isle of Wight and Greater Manchester.

Arts experiences have ranged from Bollywood dancing in Birmingham, to clay bust making in Oxford. In addition to the arts experience, each region receives Continuing Professional Development sessions for teachers with expert practitioners, and the chance for all Hubs children to complete an Arts Award.

The Shakespeare Hubs project has also offered a platform for children to share their experiences with others through showcase events. In the run up to Shakespeare Week 2019, children from the North-East Hub took part in The Children's Shakespeare Debate, hosted by Michael Rosen. There were a further two showcases during Shakespeare Week: a performance of Romeo and Juliet (with a Bollywood twist) at Birmingham Moor Street Station, and an interactive exhibition presented by the Nottingham Hub schools.

The reaction to the project has been overwhelmingly positive, as this description from one Birmingham school shows -

‘There was a real buzz around school, as the children from across KS2 shared their experiences with their peers. It was wonderful to see the children responding to the story of Romeo and Juliet through dance and drama. What was especially lovely was to see some of our children of South-East Asian origin enjoying the dance workshop - for some of them, this was the first time that they had experienced an art form originating from the heritage/countries of their parents/grandparents.’